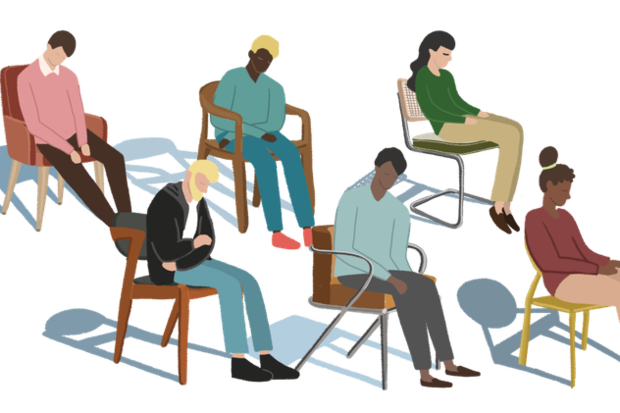 When I sorted out the bookcases during the epidemic, I found a yellowed Norwegian newspaper in a pile of folders. I actually smiled in the front-page color photo and turned over to the huge black-and-white photo on the inside pages.There my colleague Yao and I were smiling even more brightly.

'I instantly recalled how we flew to Scandinavia and Norway to participate in the international meditation summer retreat in 2007.

At that time, I was a service center supervisor at a leading telecommunications company. During the day, I was busy working like a spinning wheel. At night, due to the pressure of performance, I often slept badly. My body was tight and dizzy all day long. So my colleagues and I participated in a holiday meditation course offered by the company training institute.

Why did I choose to meditate? Purely driven by curiosity, I had heard that the lecturer Mr. Halvor Eifring spoke fluent Chinese and taught the famous Chinese novel "Dream of Red Mansions" at the University of Oslo. I was curious as to how he, who comes from Norway and has such a background, would talk about a method of physical and mental exercise in tune with nature.

The principles of Acem Meditation are based on Western psychology. It is not about religion and does not require cross-legged posture. This is what attracted me the most.

In class, we were all sitting on high chairs with good support for the lower back, and our feet naturally on the floor. The method of meditation is simple: with a free mental attitude, repeat the meditation sound silently, without deliberately removing distracting thoughts or focusing on breathing.

Teacher Eifring said: “The meditation sound" is a meaningless combination of neutral syllables. We should not create associations to it, but he carefully asked us to come to the stage to check the sound individually. He suggested that our daily practice be twice a day, 30 minutes each time, or once a day, forty-five minutes.

When I first started the group meditation, I soon heard the snoring of my classmates. I felt a deep sleepiness, but I was not willing to just be an admiring student and then end up sleeping in the chair. However, Teacher Eifring said that it does not matter if you fall asleep during meditation, because it is a physical need. I was awakened by nodding frequently by myself, and the meditation sound often ran away or changed along the way. I had to adjust the tilting posture several times and meditate on the meditation sound again.

Even so, meditating was like a deep rest, and I was full of vitality. I truly experienced that meditation does have a relaxing effect.

After half a year of regular meditation, I couldn't wait to sign up for the “Acem International Meditation Summer Retreat”, including a self-guided tour after the meditation retreat was over.

Yao and I attended meditation gatherings intensively and actively prepared for the summer retreat. It was like a short-term training before running a marathon. However, we were unavoidably nervous in our hearts. We who were still meditation newbies, would we lose face abroad?Body and mind will be liberated.

Finally, we freed up for two weeks of vacation and flew thousands of miles to Norway; I have long heard that the air there is fresh, there are lush forests, and sparkling lakes. Being able to meditate in such a natural beauty, my body and mind will certainly be liberated.The meditation retreat was seven days in total.

The course schedule was very tight. You got up in the morning and took a bath, then you could walk along the lake or walk on the hills freely. After breakfast, you would start a four-hour meditation in your dormitory at 8:30, and have lunch afterwards; After a break, the instructor would lead the group members to start a half-hour meditation guidance.

Yao and I were in a group. Of course, our tutor was Mr. Halvor Eifring.In Taiwan, I didn’t have the experience of meditating for more than one hour. Now, facing at least four hours of meditation a day, I would sleep and wake up, wake up and sleep, hot and cold, unclear in my head, my body would be tired, and my thoughts would often be far away. Was I perhaps even a little annoyed to be so out of track?

During guidance, Mr. Eifring smiled and told me that keeping a free mental attitude is all there is. He said: "When practicing meditation, the human spirit is in a free and open state. The muscles relax, breathing is smooth, oxygen consumption is reduced, and heartbeat is relatively slow. Such physiological changes are short-term effects.

Think of meditation as a habit and practice regularly. In daily life, the accumulation can produce long-term effects such as eliminating stress, developing potential, and changing personality."On the day of the six-hour meditation challenge, I felt particularly impatient. I couldn’t sit still and didn’t want to repeat the meditation sound. The sun was shining outside the window and the birds were chirping on the trees.

Why did I throw my husband away and run thousands of miles away? A faint sadness filled my heart. I couldn't help but make an international call back to Taiwan. When I heard a "hello" from my husband, I suddenly burst into tears and could not help choking. When I was sitting for guidance that day, I cried incoherently for 20 minutes, and felt slightly ashamed, but after having shared my frustrations, I felt refreshed and confident of getting better.

The evening group activity was a time for the participants to get to know and share with each other. Teacher Eifring especially urged us to integrate.

There were fifty participants in the meditation retreat, from all over the world, among which half were from England, followed by Norwegians and Swedes, as well as many from Germany and Spain. They were full of curiosity about us from Taiwan. I had to answer their questions over and over again. After exhausting the English vocabulary I still remembered, my tongue was tied into a knot. I couldn't relax on these occasions.

Seriously, for meditators, they talked too much!

We were told that since the establishment of the International Meditation Retreat, the number of people this time was the largest, and even the local media had been alerted to come to interview and take pictures; it may be that because Yao and I had the advantage of Asian faces we jumped to the front page in order to show that the International Meditation Retreat was far-reaching.

The huge title on the colored front page, hah, it's also a kind of glory for Taiwan, isn’t it!